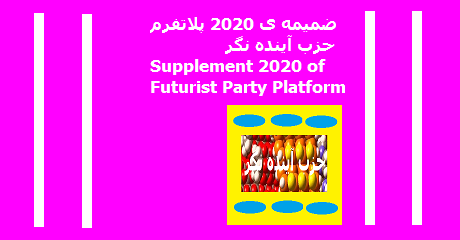 1. World Future Society (WFS) founded by Edward Cornish in 1966 failed to help the Futurists succeed in achieving a leading role in Participatory Futurism of 21st Century because he failed to see that political parties are still the main instruments in modern societies to strive for participatory futurism, just as companies are still the main instruments to strive for economic goals in 21st century as witnessed in the experience of Silicon Valley for new economy in California.

2. The main work of WFS was Analytic Futurism, which is actually the work of sociologists and forecasters in modern science and Megatrends, a book by John Naisbitt is the best example of such undertaking. Although Daniel Bell's subtitle of his 1973 mangum opus 'The Coming of Post-Industrial Society' was a modest statement 'A Venture in Social Forecasting,' but his work was not just an undertaking in sociology and was Visionary Futurism which correctly predicted the Information Society of the last half Century.

3. The 2001 Futurist Party Platform correctly emphasized Secularism and recommended not allowing the State to control the economy, learning from the experience of despotism in Communist countries and suggested not to abolish private property as a balance to the economic power of the state, but the platform's recommendation of Federalism for Iran was incorrect and it was later corrected. Nonetheless, the main differentiator of a Futurist Party is not in any of these three areas as explained in the next item.

4. Futurism has a history as long as human history itself but Modern Futurism was proposed by Futurists like Bertrand de Jouvenel and Ossip Flechtheim after WWII because they correctly claimed that the ideals of humanity particularly about social justice, stated and followed by the Left and Liberals in Modern Times, cannot be achieved within the framework of Industrial Society, whether the society is Capitalist or Socialist. Discussion of those ideals in 20th Century was best explicated by Karl Popper. And later, Daniel Bell correctly showed the dimensions of Post-Industrial Society. And therefore, for Futurist Party, the main issue is how to achieve those ideals in a post-industrial society.

5. Thus the issue of how to achieve Social Justice in a post-industrial society is central to the work of a Futurist Party. In 1989, in a paper entitled 'Theory of Uniqueness Value,' the issue of social justice in a post-industrial society was discussed by this author and Daniel Bell supported my work. Fourteen years later at the time of the first economic crisis of Silicon Valley in 2001, I wrote an article in 2003 which was based on the aforementioned work entitled 'Social Justice and the Computer Revolution,' where it was discussed that the main issue of justice in knowledge-based economies "is a problem between professional colleagues creating the wealth in this society rather than between two opposite social classes." This is why on one hand we have Steve Jobs and Bill Gates from the Silicon Valley and at the same time, we have many homeless in San Jose of California who did the same work but were not the final winner because winner-takes-all.

6. The issue of social justice cannot be solved like in a feudal society through change of ownership when the land was given to toilers in France. We need alternative income schemes, and more importantly creating *abundance*, the cornerstone of Kurzweilian Futurism, which Marx postponed to distant future. It is unbelievable that people like Bernie Sanders in our times still think of social justice as synonymous to socialism, whereas over 150 years ago, in 1858, Marx himself, the father of socialist theory, in Grundrisse, considers the ideal for social justice *not* socialism but what he expected to be after socialism basically abundance which Ray Kurzweil has promoted, and Daniel Bell was referring to it, in his letter to me more than 30 years ago in 1989.

7. I believe the central task of a Futurist Party is addressing Social Justice in 21st Century by creating alternative income and abundance in society. We are living in the Age of Singularity as discussed in details by the leading Futurist of our times: Ray Kurzweil.  The issue of alternative income is an effort in changing the systems of taxation so that it does not just tax people fairly when they work, but also pay people fairly when they do not work and current unemployment benefits really are not structured fairly and UBI which has recently even been supported by the Pope, does not provide a modest living for anybody and more importantly all these issues about taxation are so much intertwined with the state and political apparatus of different countries that we cannot expect a quick fix soon. In my view, our main focus should be to create *abundance* which is an endeavor that can be pursued by private companies, nonprofits, and the government.

8. Creating *abundance* has been a focus of many scientists and technologists, e.g. open source project, but we should not put our hopes in the great works they do including what has been achieved by nanotechnology. Futurist Party should pursue the goal of creating *abundance* as the main task of all activists. Just take a look at your watch. Today anybody can buy a watch. When I was a child, having a watch was a luxury and was even synonymous with *Omega Watch*. Today still Rolex and Omega watches exist as luxury items but to fulfill the need to know the time, one can have a watch without being rich just as anybody can breathe air and does not need to pay for it, unless in situations like Corona pandemic, that we need ventilators. Abundance is the key, whether for our basic needs like food, clothes and shelter or things that are not basic needs like watching an entertainment show as it is abundant on YouTube today. Achieving abundance should be the central goal of the Futurist Party.

9. Now to achieve the goal of abundance, we do not need plans like socialists of 19th century to fight against capitalist class to take from their property to give to the working class. The main work is not antagonistic or what Marxists called 'class struggle.' The main work is to find creative ways to achieve abundance and work with individuals regardless of their social standing to help with this work and even get the government to cooperate through the work of people's representatives in the legislators. Just taking a look at social contributions of individuals like Warren Buffett and Bill Gates can help us to see what is possible from the private sector! I personally know somebody who was an activist in Iranian Students Confederation and was a Communist before 1979 Revolution, but afterwards, he became disappointed and left all political activities and went his way becoming a multimillionaire and lives with his wife and son in Canada and all these 35 years that he went to Canada from Iran has not contributed even a single dollar to any social activities of Iranians. This is the result of bad political upbringing in leftist leaning organizations which was the system Confederation educated its members and cadres, a mentality of all or nothing.

10. The first Futurist Party by the name of 'Iranian Secular Democratic Party (ISDP)' after a year of preparation was announced in September 2016 in Hamburg by Dr. Esmail Nooriala and his associates from Iran, United States, Canada, Europe and elsewhere in the World. The platform and activities of ISDP since 2016 shows that Futurist Party Platform is a viable plan for political activity in the 21st Century. Current Secretary of ISDP is Mr. Manouchehr Yazdian who lives in Holland.