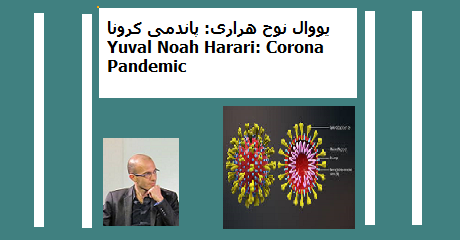 A month ago an article about Corona Pandemic by historian Yuval Noah Harari was published in the Time Magazine, and there was an interview with Mr. Harari in a Persian TV today. Mr. Harari's view of nation-states resonates with a view expressed more than 30 years ago in a paper entitled 'A Futurist Vision':

"If families lost their economic and political functions centuries ago, it is in our lifetime that nation-states are losing their power roles."*

Mr. Harari's suggestions about global cooperation to deal with Corona virus are also shared, but at the same time we need to remember that with the best of intentions, if all countries are on a wrong path, even the result of their cooperation may not yield anything worthwhile, and futurism is important, in other words, we need to go beyond capitalism and socialism and focus on Singularity rather than trying to mix the two which the likes of Tito in former Yugoslavia advocated with no success. In fact scaring people of side-effects of Gene Therapy and GMO that was advocated by the left, very seriously damaged genetic research especially in the US during the last two decades. Problem of Side-effects is a reality but as Ray Kurzweil has reminded us, it needs to be addressed by Simulation.