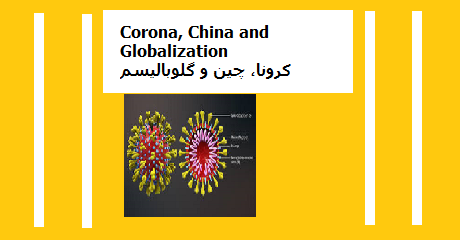 Communist China's approach to Corona virus was nationalist and led to the current world catastrophe. Even 1918 pandemic was a global issue although globalization was in its infancy at that time. UN should take a much bigger role in dealing with issues like this but its current structure is not effective. Ebola before reaching the U.S. during Obama's era took as many lives in Liberia, as Corona has already taken in Iran and Italy today; but Liberia was a lot more open than China, and more importantly it was a matter of luck that the cure was found quicker by an American research team that included Iranian expatriate Dr. Pardis Sabeti of Harvard. Globalization is not just in the sphere of economics and the role of nations in global world is like families in the era of nation-states, but global world needs global solutions. We are now facing the prospects of an economic disaster like the 1930's Great Depression which was also a global issue although centered in the U.S. The main focus should be on quickly finding a vaccine for Corona and a real cooperation between the US and China is the key to success. No doubt China is to blame for their secrecy and a simple comparison of Taiwan and Communist China shows main land population were hurt the most whereas the genetic structure of population of both countries is similar. But now is the time to find a solution for the problem by leaving politics aside.