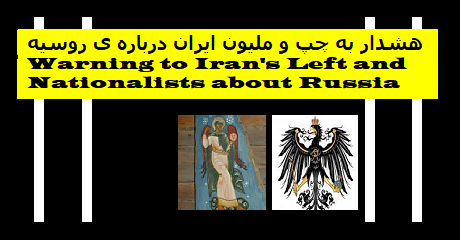 Dear Friends, As I wrote a few days ago, I am still dealing with illness and the repair work of my apartment owner and cannot be active in publishing work, nonetheless, I saw the need of just writing this note about the current situation. In fact, during the last 5 minutes of my talk about retrogressive alternatives, which was recorded and published a little more than a year ago by my dear friend Dr. Morteza Anvari, I referred implicitly to what I am discussing in this article, and would like to ask all my friends, if they can, to send the link of that short video to everyone they know (unfortunately it is only in Persian)! Also the subject of discussion about Russia, was reviewed in a more straightforward way in a few articles during the last two years!

Let's remember the time of start of WWII. We all know Reza Shah getting close to Nazi Germany, helped the industrial progress of Iran; but, at the end, that was the reason for the defeat of Reza Shah himself; however, in reality, the mistake, was by the left and nationalists, and in fact, the ones who managed the government of Reza Shah, were in reality following the left and nationalists! In other words, after the end of World War I, Germany was defeated, and started reconstruction, and Weimar Republic was formed in Germany, which was a symbol of that reconstruction, and social democrats had a prominent role in that regime, which was the best example of a democratic state in the whole history of Germany to that day, and the intellectuals of various countries including Iran, supported it, and Dr. Taghi Arani, was one of them, although he was a Leninist, while the social democrats of Weimar Republic were supporters of Karl Kautsky, and despite Taghi Arani who lost his life in Reza Shah's prison because of his Communist ideas, nonetheless, opinion of Dr. Taghi Arani about Germany, was not any different from those running Reza Shah's regime! Perhaps the fact that German government changed rapidly to a Fascist Nazi regime, was understood by Europeans very early, and Chamberlains were replaced by Churchill's, but for Iranian intellectuals, even till the end of WWII, still the change of Weimar Germany to Germany of Nazi Party, was not well-understood!

The truth is that today we have a similar situation, leftist and nationalist intellectuals of Iran, when talking of Russia, speak as if they are talking of the days of Gorbachev; whereas it has been years since Russia has distanced itself from those days and the attack of 8 years ago and annexing Crimea, showed the new fascist reality of Russia! At any rates, at the time of Reza Shah, the left and nationalists of Iran made a huge mistake about Germany, in other words, it was not only the government of Reza Shah that made a mistake and paid the atonement. Also today, Iran's left and nationalists still have not understood the reality of Putin's Russia and it is not only the Islamic Regime that by choosing Russia as an ally, has put Iran at a grave risk! A reality that can be learned from the era of World War II is that major powers like Russia at the time of WWII, and China in the present era, are able to change the the game at the so-called 90 minutes, the same way Soviet Union at the time of WWII distanced itself from the non-aggression pact with Hitler, and joined the Allied Forces against Nazi Germany, but for a small country like the government of Reza Shah at the time of WWII, such a turnaround was not possible, and this is how Reza Shah's regime itself was destroyed!