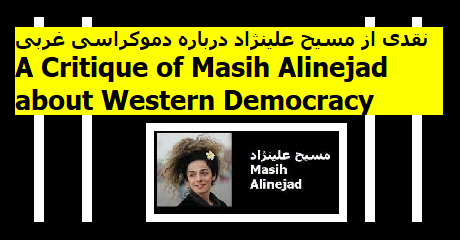 I call you a friend although I have neither met you nor have had any phone call or correspondence with you and it is all because I fully admire your tremendous efforts to support human rights in Iran! And although just as I did in a critique of you in Persian about another topic, less than a month ago, my critique here not only does not mean that I reject your candidacy for the Nobel Peace Prize, on the contrary, as announced a month ago, I fully support you to be nominated for the Nobel Peace Prize this year, and just as I did the same two years ago!

Also I condemn the attack on you a few days ago by a few unnamed individuals blaming the wrong policies of the VOA Persian Service on you because you had belonged to the Iran's Islamic Reformist faction in the past! I believe your works are the only good thing coming out of the VOA Persian Service. And as far as my view of you being part of the Iranian Islamic Reformists in the past, I view it the same way I have always looked at people like late Senator Robert C. Byrd who was a member of KKK but later changed his views in life and was one of the most ardent promoters of democracy and anti-discrimination in the US Congress!

So now after all this introduction, what is my new critique of what you have recently expressed? Two days ago, you said the following in Italy and you have also posted on your twitter:

"Masih Alinejad: I am furious with the Western governments and Tech companies. While millions of people in Iran are banned from social media, why don’t you kick out the dictators from social media?"*

Short answer is that exactly this is the difference between us and them! Again I believe on the opposite, you should be proud of the Western governments and not furious for what you note and because exactly this is an important thing that differentiates a real democracy from a dictatorship. You may ask why a country like Germany today bans hate speech of Nazis. I would respond that most hate speech laws in Europe are counter to freedom of speech and US laws are more advanced in this regard, although I understand some issues raised by the legal systems in Europe that deserve some merit. I mean I understand that when someone provokes violence by hate speech and causes somebody else to do a violent act, the former individual should also bear some responsibility which is correctly noted by the European laws, but I would disagree to stop freedom of speech to avoid the consequences of hate speech. I believe freedom of speech should take precedence, because humanity has suffered enough due to lack of freedom of speech.

I should remind you that at the height of Cold War, long before the Internet, the 12-volume collected works of Stalin and the 45-volume collected works of Lenin were available even at the libraries at the most remote locations in the United States and this is a great differentiator of U.S. democracy and totalitarian states which unfortunately still many of the leftists who although today understand despotism of the Communist Camp countries of the 20th Century, still do not take note of this important differentiator!

Again my thanks to you for all the great work you do to inform the world about the IslamicKKK.