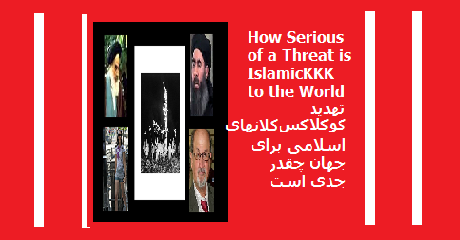 Discussion of IslamicKKK was summarized in 'Retrogression vs Backwardness; IslamicKKK is like Unabomber,' the main issue *not* being *backwardness*, but rather *retrogression* of IslamicKKK whether Shi'a or Sunni, as they both strive to return Iran, Middle East and the world to 1400 years ago. Thus the need to eradicate IslamicKKK rather than hoping to control it by mutual containment of its Sunni and Shi'a versions, and this strategy was discussed 4 years ago in 'Time for a Global Secular Initiative.' Why aren't we seeing a serious action by Western Democracies in this regard? I believe they still consider the Islamist movement as an ally against Communist or former Communist global powers such as China and Russia. But Communism is a dying threat whereas IslamicKKK at this time is a rising threat, and is at a point where Nazi Fascism was in 1934.  And this is why creating a world-wide alliance against IslamicKKK is important now. If the world had started to eradicate Fascism in 1934, i.e. just five years before the start of WWII, maybe most of the fight against Fascism would have been a cultural, political and ideological battle rather than a deadly war and humanity would not have suffered the death of more than 56 million people in the Holocaust and WWII.