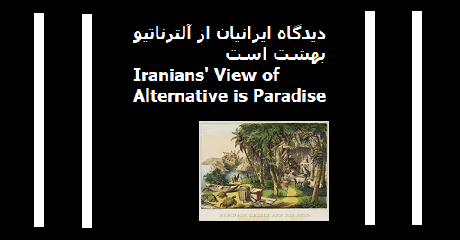 Etymologists say the word 'Paradise' in English originates from Persian. Four years ago, I wrote a paper entitled '1979 Marxist Kon-faya-kun in Iran' where I discussed Iran's 1979 Revolution resembling it to Marx's ideals put forward as a call for a 'Heaven on Earth' in his 'Critique of Hegel's Philosophy of Right,' at the beginning of his political career and later in his 'Critique of Gotha Program,' at the end of his life! Unfortunately that paper of mine has never been translated to English. In a few days, we have the 42nd anniversary of Iran's 1979 Revolution and although Iranians have been calling for secular democracy during the last 20 years but all secular democratic alternatives have not gained popular support. We know what the secular democrats promise in their alternative for the future, is real, but in comparison to the hopes offered by Islamists and Communists, they are nothing! People still put their hopes in Islamic Reformists who continue to repeat Khomeini's promises of heaven on Earth but achievable under their leadership! The same can be said about hopes offered by Radical Communists who do not support Islamic Reformists and the Anarchists, and the same can be said about most other opposition forces when their leaders do not believe what they promise is achievable, yet keep repeating those promises to hold on to their supporters! Let me explain what I mean by realistic! I have been active in the Futurist Movement in the U.S. for almost 40 years. One of the most successful organizations that I have seen during this period is the Lifeboat Foundation. The one in charge of that organization is Eric Klein who sincerely worked very hard. Almost a year ago, he developed a case of cancer and started a fund to help him with his health issue and that is in the United States where people have insurance, etc, in a country that has had secular democracy for 250 years, so how can we in Iran's secular democratic and futurist opposition, promise anything better for Iran if we do not lie about some paradise? On the other hand, Iranian people want 'Paradise as an Alternative,' and for us the secular democratic and futurist Iranian opposition, the choice we offer as a truthful alternative, cannot compete with the false promises of competing forces and as an American idiom says, we stand between a rock and a hard place! Nonetheless, what was discussed in 'Futurist Party Aims for What Marx Deferred to Distant Future,' is true and it has even been reflected with accurate details in the Supplement 2020 of the Futurist Party Platform, but that is not what Iranians can expect as an immediate future tomorrow! As discussed even in the U.S. after 250 years of a successful secular democracy, the life of a futurist activist was described above as an example of the reality!