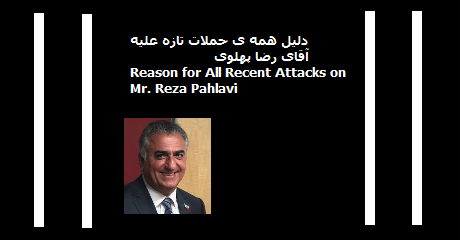 Some new attacks on Mr. Reza Pahlavi are coming from people who oppose monarchy and is not anything unusual although as always, unintended errors by some monarchists add to misunderstandings, nonetheless all these have nothing to do with the increased attacks on Mr. Reza Pahlavi, yet personally I condemn those who because of differences with the monarchists have recently wished the way Bolsheviks treated the Romanovs for Pahlavi family, and I see their position of supporting such a historical crime and wishing it for the Pahlavi's to be as equivalent to supporting the Holocaust; in the past I have clearly condemned Lenin for ordering the murder of Romanov Tsar Nicholas II and his family which has been proven to be true by genetic tests after the collapse of Soviet Union, and it was hidden from the public by the Soviet Regime all those years. Let's return to our topic of this article. Other recent attacks on Mr. Reza Pahlavi have started, for example an alleged tweet by Mr. Ardeshir Zahedi saying there is a US attack in the works and Mr. Reza Pahlavi is part of this plan calling Mr. Reza Pahlavi a "traitor". I have already said my opinion about Mr. Ardeshir Zahedi and nothing to add. Of course one can never say for sure anything about the dynamics of IRI-US interactions but this is what I think of the situation and do not think it has anything to do with what Mr. Reza Pahlavi has done recently. There are only a few months till the US presidential election in November. US Democrats like to use Iran peace card and are saying that scraping JCPOA by President Trump was a failure. Also some supporters of President Trump like to sign a new deal with IRI to prove Democrats to be wrong. And surely as always there are those who like to have a war with IRI. Mike Pompeo, President Trump's Secretary of State is correctly trying to extend the UN ban on selling arms to Iran and Elizabeth Warren's tweets of yesterday in response to Mr. Pompeo shows Ms. Elizabeth Warren's lack of understanding foreign policy. Nevertheless, frankly if President Trump wins, the chances for IRI ever getting a deal from President Trump will be very slim and these few months till November are the only chance.