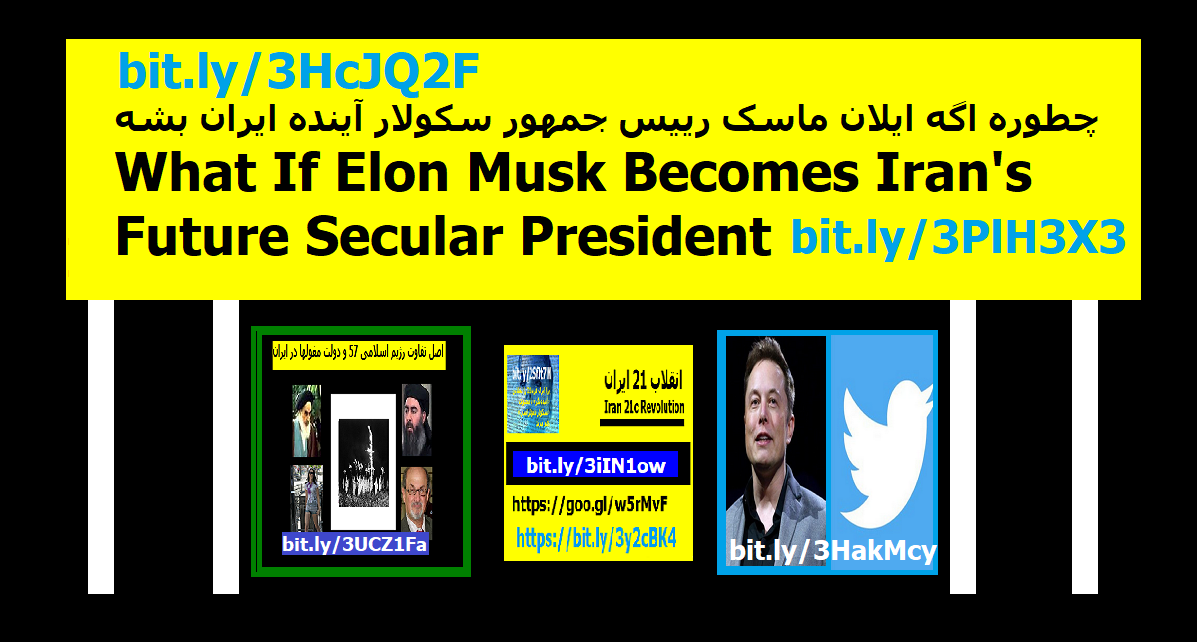 I was thinking Iranian people in the last 5 months of Iran 21c Revolution, without any arms and peacefully, with unity, going on strike and forming coalitions, protested by widespread demonstrations and nationwide strikes against the Islamic Regime ruling Iran, and the IslamicKKK which is in power in Iran, has not only aimed at the unarmed people with bullets on the streets but openly published the statistics of it, and this regime does not put on trial those who use arms to kill unarmed people, and instead, put the unarmed protesters on trial and issues death sentence for some of the latter and just less than three years ago, this Islamic Regime of Iran (IRI) was condemning the US over George Floyd, whereas the US put the police personnel who had mistreated and killed George Floyd on trial and sentenced them, and not even one protester was put on trial in the US! But why did I write how about considering Elon Musk for the position of next secular president for Iran and what a pity he does not know Persian! Well, Elon Musk has bought the Twitter and is dauntlessly managing it and Elon Musk himself has written that he receives death threats everyday * and still continues! You may ask that Iran's future secular president is considered for after the overthrow of the Islamic regime! That is true but think about it, these Islamists now that they have all the power in their hands and the people are just protesting with no arms, they still brought all these disasters to martyrs Zhina Mahsa Amini and Nika Shakarami, and now are doing it to millions of other protesters, then what will they do when they get overthrown? Do you think they will sit and like some human rights activists who have been imprisoned for no reason for years in Evin prison, these Islamists will sit and write advice about non-violent movement! No, all you need is to look at Afghanistan that the U.S. with its mighty army overthrew Taliban, but Taliban made so much bloodshed everyday until finally the US itself, agreed to the return of Taliban to power and not only the government of Biden of last 2 years, but the Trump administration before him as well!

In reality, if Taliban was not overthrown with the guns of the U.S., maybe Taliban would never be overthrown even after the September 11th disaster of 2001, because in the last half century the Islamists all over the world that have come to power, we have not seen any of them to fall by a non-violent movement and the last example was Raqqa of Syria and Mosul of Iraq where the US defeated Daesh militarily and brought them down from power! IslamicKKK in the the last half century had no qualms to use arms and to their last breath used it to remain in power and their issue has never been separatism or imperialism! If Daesh did not attack Iraqi Kurdistan, it was because they knew the Kurds have military power and have no qualms to use their arms to fight Daesh! As far as the Iraqi Shiite Islamists and Iran's Islamic Regime and their relations with Iraq's Kurdistan Regional Government (KRG) is concerned, one can say the same thing that they know about the military strength of each other, and allies of both sides, otherwise as far as the approach to KRG, the Shiite Islamists and Sunni IslamicKKK hardly have any difference! Therefore, whether now that the power in Iran is in the hands of the Islamic regime and if tomorrow that a secular regime rises to power in Iran, the issue of danger of armed IslamicKKK will continue to remain and they do not want to lose a huge country like Iran which they owned for 44 years and if Iranian secular democrats even with the help of the biggest world powers succeed, they still can lose again to the IslamicKKK in international deals just like the Afghans! Secular democrats all over Iran, sooner or later, we need to get military training and be able to defend ourselves in face of the armed Islamists, since these armed Islamists are a permanent threat to Iran and Iranians not only today but even after the power is gained by the seculars! Let me emphasize at the end that this author has always been and am against guerilla warfare whether during Shah's regime or in the Islamic regime and bringing up the need to learn serious military skills to help people's uprising when the need comes up, which is *not* today and still the need is to expand the protests to at least half of Iran's 85 million population, thus mentioning the need to learn military skills does not mean recommending to start guerilla warfare at all!