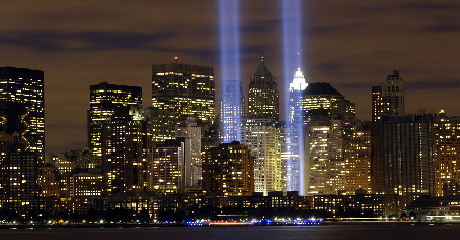 The crimes against humanity of supporters of Islamic Apartheid and their attacks on progress and human rights has not started with their brutal terrorist attack on World Trade Center in New York. It has been going on for a long time and the West had heard it loud and clear the first time, with the fatwa of Ayatollah Khomeini to kill the author Salman Rushdie (1) because of Salman Rushdie’s ideas opposing Islam (2). Islamic Apartheid has been trying to lynch Salman Rushdie for over a decade . Even though Iranian government distanced itself from the fatwa, but the terrorists in Iran openly collected bounty money to kill Salman Rushdie.

The Islamic Apartheid has slaughtered many of their opponents such as Shahpour Bakhtiar, in cold blood, in Paris, while basically the West stayed silent and did not want to take any drastic action, risking a change in the status quo of the Middle East, where only the safe flow of oil from that region, is all that the Western states cared for. The atrocities of another state of Islamic Apartheid, the Islamic Fundamentalist regime of Taliban in Afghanestan, has been known for a long time. For example see the following website about their crimes against humanity (3).

Regardless of what various governments do in response to the WTC bombing, I think one thing is certain that the Islamic Apartheid lost its legitimacy with the heinous atrocity of World Trade Center in New York. Islamic fanatics cannot pretend as victims anymore. The victim game that the Islamic Republic and its agents had played for so long, while committing the crimes against humanity, will not work anymore, to get the support of some pseudo-intellectuals in the West. Their terrors against the dissidents such as Bakhtiar and Ghasemloo in the West, cannot be written off, as actions against imperialism anymore.

Iranian government allowing terrorists to freely collect money and plan for the murder of Salman Rushdie cannot be acceptable anymore. When committing stoning of a porn movie star in Iran or killing Forouhars and writers for their ideas inside Iran, one would ask about what Islamic Apartheid is doing to humanity. Yes, their gesturing of defending themselves against the imperialists, and showing themselves as victims, does not cut it anymore. The bombing of WTC by supporters of Islamic Apartheid was equivalent to the burning of Jews in concentration camps by the Fascists, when after the publicity of their atrocities, they lost their legitimacy, and could no longer justify their murderous ideology, with the cloak of combating decadence.

Finally it is very sad that the Middle Eastern people are being attacked as Islamic fanatics in the West. In fact, the majority of the people of Middle East, both in countries like Iran, Afghanestan, and other Middle Eastern countries, and Middle Easterners abroad, are the ones who have opposed the Islamic Apartheid more than all the Western people and states, and they have given many martyrs in their challenge of Islamic Apartheid. Among them, dissidents like Dr. Shahpour Bakhtiar in Paris and Forouhars in Tehran. The reality is that the real force of retrogression in the Middle East is Islamic Apartheid, whether in the form of retrogressive Islamic ideologies of Islamic fanatics in Iran, or the Islamic Fundamentalism of Taliban, and it should be challenged by all progressive-minded people all over the world.

2. Fatwa Killing of Ahmad Kasravi and Others by Islamic Fundamentalists (June 10, 2002)
http://www.ghandchi.com/153-Kasravi.htm

3. Scenes of amputation by criminal Taliban in Kabul
http://www.rawa.org/handcut3.htm