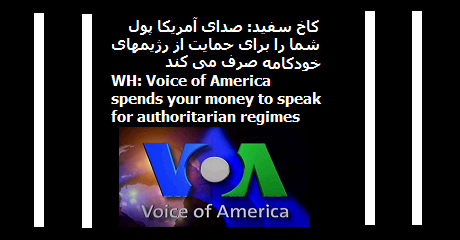 Yesterday President Trump's White House, issued a statement about VOA entitled: 'Voice of America spends your money to speak for authoritarian regimes.' VOA Director Amanda Bennett just issued a statement in response. Being a journalist, I avoid partisan politics, but contrary to what Ms. Bennett claims, it is a fact that VOA upper management does not follow VOA Charter. For example, CNN controlled decision-making of VOA Persian Service in the last decade. Mr. Steve Redisch a former CNN executive was acting director and then installed Ms. Setareh Derakhshesh as the VOA Persian Director. Mr. Redisch and Ms. Derakhshesh are career employees and not political appointees, yet favored CNN and NIAC and we all know about NIAC and CNN which is the main reason for what White House has correctly stated.  I lost my job at VOA after 8 years because of political discrimination. Last year, in a work application, I listed my job at VOA from 2005 to 2013, but VOA lied to the fact-checking and said I never worked there. I was lucky to have my old contracts and gave the prospective employer a copy of my documents. Such lying by VOA was definitely illegal. I never filed a lawsuit against VOA, or any other employer in my life for that matter, I just do not do that. I never lie, anyone is welcome to do fact checking about what I have written about VOA and none of it is partisan politics. VOA management simply does not adhere to the VOA Charter, and political discrimination is abundant; VOA upper management ruined my life!