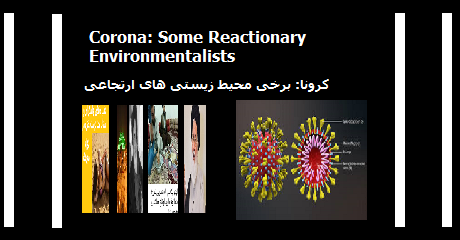 The difference of being retrogressive and backward, with more examples in Persian, was discussed in the past. Some environmentalists offer reactionary analysis about the corona pandemic which is very similar to what IslamicKKK did in Iran and the Middle East in the last half century using the problems of advanced societies as an excuse to advocate retrogression. My late father was born in March of 1917 before 1918 influenza pandemic and his mother gave birth 30 times in the central area of Tehran of which only three survived, one older than my dad and one younger, and they were not a poor family, that was considered "normal" in those days in Iran. Current corona virus kills 1 percent of those who contract it, whereas 30 percent of those contracting smallpox die, thus the only reason we currently have such a catastrophe with corona is because we still do not have a vaccine, and more importantly, we are still dealing with it in 20th century fashion and did not develop genetic resistance methods, when we even cut the research budget of such works in 2013, because we wanted to avoid animal sacrifice in testing and the death of humans as side-effects of gene therapy, and as discussed yesterday about Kurzweil's ideas of using simulation for testing, the solution to the problem is to go forward and not backward as some reactionary environmentalists suggest.