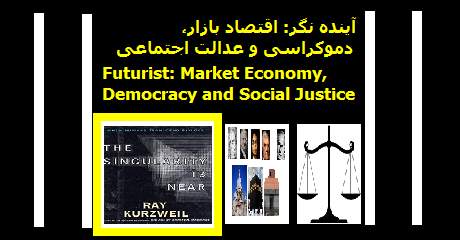 In 15th Century, with the invention of manufacture in Europe, we see the start of dominance of market economy in the world. The nature of competition in the market economy, became an economic foundation for Modern Democracy! This competition continued for 500 years, and contrary to Lenin's belief, the growth of monopoly capital at the end of 19th Century, did not stop this competition at the heart of market economy! At the same time, dominance of market economy in the world, expanded the social inequalities which called for the need to address the issue of Social Justice in the Modern World and beyond! This dual reality of democracy and need for social justice, has been the reality of Modern Times for half a Millennium. As we enter Technological Singularity, as shown by Kurzweilian Futurism, human societies will be essentially different and issues of Democracy and Social Justice will be addressed in new ways as discussed in a book entitled 'Futurist: Humanity's Nowruz in 21st Century (New Variant to Meet Human Needs).' But till that time, trying to eliminate market economy and liberal democracy, or attempting to kill endeavors for creating alternative income, will only create despotic or economically unjust monsters like the totalitarian communist and fascist states, when one claimed to serve the majority while the other wanted to serve a selected few, and they were both based on State Economy, ruining the lives of more than half the population of Earth in 20th Century!