Bill Gates and Why Futurists did not Predict Corona Pandemic
Sam Ghandchi
http://www.ghandchi.com/3176-corona-futurists-english.htm 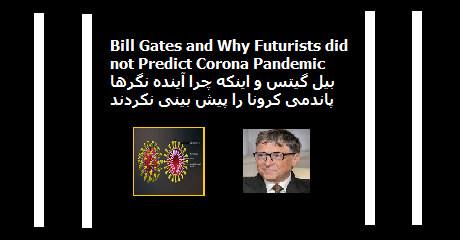 Some people say Bill Gates had predicted Corona Pandemic and they base their claim on a 2015 presentation of Bill Gates. I watched it and only an image of a virus on the video looks like a corona virus but he did not say anything about corona virus nor had he predicted corona pandemic. And I should say the futurists did not predict such an important event of Corona Pandemic either, which we sadly have to deal with today. Why? Let's remember something futurists predicted so well, namely the Information Society which was accurately predicted by Daniel Bell in his magnum opus 'The Coming of Post-Industrial Society.' In 1960's, in competition to Soviet Union, there was a lot of research funding about future potentials of technology in the United States and Daniel Bell himself served as a member of the President's Commission on Technology in 1964–1965. In contrast, US government has cut budgets for most of science and especially biology-related projects in the last 10 years. Actually we should give credit to Bill Gates for creating Bill and Melinda Gates Foundation for biology research that has been very active in the last decade when government funding for biology-related projects was totally absent and many top biology talents in top U.S. universities were wasted who moved out of the field of biology and scientific research for good. But the budget of Gates Foundation in comparison to former Government budgets for science is like a drop in the bucket. Thus no wonder the futurists did not predict this Corona Pandemic. Futurists base their work on the actual research done in the universities and industry by the scientists, something which was basically absent in the area of biology and many other fields of science during the last decade. Three years ago, I wrote an article entitled 'State of Science not Rosy Picture Depicted in the Press' and reading it may make more sense today that we are faced with this disaster of COVID-19 pandemic.