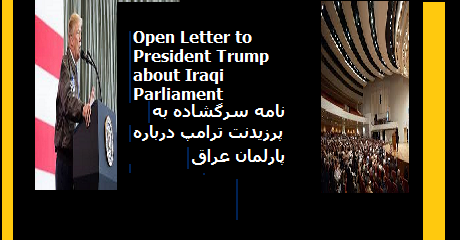 We are witnessing a *game-changer* in the Middle East. As we all know, the IslamicKKK are experts in using freedom to kill freedom. Just look at Pakistan, when years ago the Internet was blocked by government for a few days, Islamists occupied all the streets till Internet was unblocked; whereas Islamic Regime of Iran (IRI) has blocked the Internet for over 15 years and kills or jails anyone protesting it, and they have now created an *anti-nationalist Interanet* which blocked the whole Internet just two months ago during the November 2019 IRI Street Massacre. The recent decision of Iraqi parliament is in the same vein because IslamicKKK creates fear and shows power by terror to those parliament members to scare them away from supporting the United States. Islamists and their agents use freedom to kill freedom even right here in the West, so it is not surprising they do the same in Iraq. My suggestion to you is to continue support of Iraqi people who are fed up with Islamists of all colors in their country and are risking their lives by speaking out, just like the Iranian people who appreciate you standing up to IRI repression, and will put an end to the Islamist regime ruling Iran and will replace it with a secular democratic and futurist republic which was proposed 15 years ago in opposition to Khatami's empty promises of the so-called "Islamic Democracy".