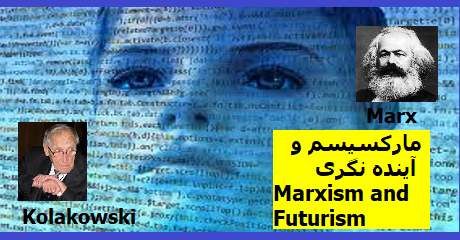 Almost 30 years has passed since a major contrast of Marxism and Futurism was published by Alvin Toffler entitled "Previews and Premises"(1). And Alvin Toffler just like most futurists (2) dropped any pursuit of grand plans for social/political/economic engineering which was the zenith of Marxism in its ultimate goal of abolishing private property of the means of production and the related market economy, to replace it with public ownership and a totally planned economy. Tofflers, in the absence of any grand scheme for the society of the future, continued their work on topics like reinventing the corporation.

Also with the fall of the Soviet Union and Eastern Bloc countries, Marxism essentially disappeared as a major political ideology of the modern times. But the question still remains whether having a grand social scheme for the world is totally a wrong pursuit and whether such comprehensive visions inhibit the growth of open society? Or, one can learn from the experiences of old religions and modern political ideologies to understand the limitations of global visions and more importantly use that examination to avoid the catastrophes such as the totalitarian states of the 20th Century (3).

One of the most knowledgeable analysts of Marxism, Leszek Kolakowski, believed that such grand schemes were the reason for the cataclysm that Marxist ideology brought to the world. Kolakowski, in the last years of his life, said that capitalism with its focus on human greed for motivation had proved itself successful due to being a natural development rather than being something made by design. But in response to Kolakowski, it should be said that most of the capitalist countries actually developed thanks to a social scheme called comprehensive liberalism with its major proponents being thinkers like Locke and Kant in Europe; even the American experience was more in tune with the Leibnizian (4) version of liberalism advocated by Jefferson. Thus it is not true that Western capitalism has not been based on any social engineering.  Moreover, other industrial countries like Russia, basically used a communist model to build the industrial society, although they are now more in tune with the capitalist model. In other words, just human greed by itself never built capitalism. Even Adam Smith's "invisible hand" is more about the description of how the market economy works and is not about how such economy was built in different countries (5).

The question I am trying to address is not about the past, of how capitalism was built, which is something historians continue to work on and Kolakowski's notes are surely very valuable. What I am trying to address is whether attempting to come up with a vision of a new society, or even having a utopia, necessarily means giving in to a dictatorship for the future? My response is negative. In other words, I believe the ideals of liberalism were as much utopian as the ideals of communism, and actually the former is not seen as a recipe for dictatorship although it has been utopian in its ideals of human rights, separation of power and open society. Furthermore, I should add that not all versions of Marxism ended up in dictatorship. For example, the European social democratic countries were not dictatorial thanks to distancing themselves from Marx's "Critique of Gotha Program" by ignoring it from start, although accepting almost all other tenets of Marxism (6).

It is true that both liberalism and socialism became "imperialist" in 20th Century, and it was not only social democrats of Europe but also Leninists after coming to power in Russia, were imperialist towards the developing countries. Nonetheless becoming imperialists definitely was not part of the plan of liberals or socialists. The imperialist stage was in reality what I like to call the mid life of industrial society and had nothing to do with the grand scheme of communism or liberalism for that matter.  So one can say imperialism, perhaps, was a higher stage of industrialism, borrowing the term from Hilferding and Lenin who used it for capitalism.  And fundamentally the imperialist developments of industrial society were more related to the inherent "greed" which is admired in capitalism by Kolakowski, if taken as development of production and markets beyond the boundaries of nation-state. Moreover, the same economic developments have now led to globalization which incidentally is more to the advantage of developing countries. However, some political forces in the advanced countries that oppose globalization, in reality are more in tune with high paid professionals who are losing lucrative jobs they had, e.g. in computer industry in the Western countries, to their counterparts in developing countries (7).

Both liberalism with its property owning schemes for social justice, such as the model proposed by John Rawls (8), and socialism with plans like welfare state in Europe, have not been able to resolve the issue of social justice in the advanced countries. Many companies of  advanced countries moving operations abroad have created a semi-aristocracy in the mother country drawing owner's profits from such firms. And with the intense competition of the developing countries in the world market, the issue of social justice in advanced countries is intensifying (9). The conflicts in the US between the Tea Party (10) and Democratic Party regarding the heath care issue exemplify the intensification of the disparities and social justice in the Western countries. Cutting social benefits in European countries like Greece, Spain and even Sweden is another example of the scope of the problem (11).

Many retrogressive movements in the world are capitalizing on the above two issues of advanced countries, namely the attitude of the West towards developing countries and issues of social justice within the developed countries (12). Of course, returning to the medieval or ancient past will not be a solution for these dilemma but these complications point to the depth of crisis of the industrial society.

Is it time to propose new visions for the future?  Are new visions necessarily a recipe for another dictatorship like the way Marxism ended up in Communism? As noted, visions such as comprehensive liberalism not only were not a recipe for dictatorship but they even helped to curtail many despotic options in Europe, and in Americas. There is no need to be afraid to think of visions for the future although one should be careful of monistic outlooks that disallow other ways of thinking (13), and also avoiding schemes that leave power to a state or private sector with very little checks and balances is critical. Nonetheless, anarchism is as dangerous and can end up to be a recipe for dictatorship just like its counterpart of Communism advocating total planning and government ownership.

Visions for creating economic abundance and ending scarcity are more significant than ever in the 21st century (14).  Also being open to scientific thinking as well as other philosophical speculations like what Willis Harman proposed in his "Global Mind Change" should be examined. We really do not know what is beyond time and space and ready-made answers of the dawn of science rejecting anything beyond the material world is as irrational as the beliefs of Abrahamic religions were regarded as final truth before the age of science.

We are seeing that predictions of Ray Kurzweil about accelerated change are showing more and more to be true (15). And that should make us more aware about the new retrogressive environmentalist movements in the West that demonize developments such as GMO's, achievements that can be instrumental in feeding the 7 billion world population which is our present reality (16).

3. Pluralism in the Western Thought
http://www.ghandchi.com/301-PluralismEng.htm

12. Islamism Wants to Lead Redivision of the World
http://www.ghandchi.com/472-ww3Eng.htm

14. How to Fix the Economy?
http://www.ghandchi.com/677-EconomyEng.htm