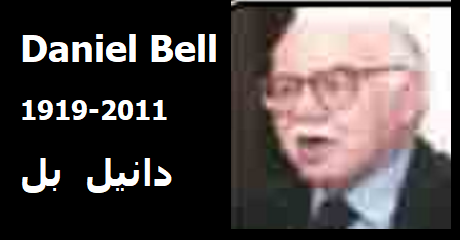 I have been one of the firm supporters of Daniel Bell's theoretical works and have written that I agree with 99% of his writings (1).  At the same time I have opposed the neocon viewpoints before and after the US-Iraq War of 2003 (2). Some authors when writing about the war consider Daniel Bell's "The End of Ideology" of 1960 as the starting point of neocons (3). Unfortunately Daniel Bell was very old during that time to write about the war or anything else for that matter. He passed away more than two years ago at the age of 91 on January 25, 2011. But less than two years before his death on September 26, 2009 in a letter to Economist regarding the obituary of Irving Kristol he clearly distanced himself from neoconservatism. Daniel Bell always wrote of himself as "a socialist in economics, a liberal in politics and a conservative in culture" and in that note he indicates that can even be labeled a "social democrat" but not a "neocon". True that there have been some futurists like Alvin Toffler who always supported a well-known neocon, Newt Gingrich, in politics, but as for Daniel Bell, even though he was a personal friend of Irving Kristol, but clearly said that he did not share Irving Kristol's political views (4).

Almost ten years after the start of US-Iraq War the neocons are again active in the US political landscape trying to start a new war, this time with Iran. I do not need to answer for Daniel Bell because as noted above he clearly distanced himself from the neocons before his death. But it is important to look at the views of Daniel Bell and understand that not all futurists were neocons and actually the legacy of Daniel Bell is a great guideline when dealing with the rise of Islamism (5). Of course the majority of futurists in the last 50 years distanced themselves from politics altogether (6), nonetheless at the time of US-Iraq War of 2003, there were many futurists who not only did not support the war but long before the war pursued visions that were antithetical to neocon viewpoints (7).

Modern futurism (8) basically started after World War II when some thinkers like Ossip K. Flechtheim and Bertrand De Jouvenel reasoned that neither socialism nor capitalism can provide the answer to issues that humanity faced and saw the need not for a centrist position between socialism and capitalism but to go beyond them. Almost 25 years later this thought was best described by Daniel Bell in 1973 in his book "The Coming of Post-Industrial Society" where he clearly showed the world economy going beyond the industrial society what we call today the information economy. But in those early days after WWII still the critics of  Communism in the West were liberals some leaning towards New Left on one side and others leaning towards Conservatives.  Daniel Bell's "The End of Ideology" in 1960 basically argued that both those critics were ideological whereas in reality the content had long been exhausted. In the United States and Western Europe basically all the demands of comprehensive liberal theory not only had become laws of the land but were getting incorporated in the culture and social relations. The same was true regarding the demands of socialists in many Western European countries where social-democrats ruled and even in the U.S. many similar demands were met during Roosevelt's New Deal through the power of the Labor Unions. Thus stating "The End of Ideology" would make all the Soviet propaganda of the time meaningless because not only the conservative discourse but even the discourse of liberal left would be discarded. However we should remember that the rise of Maoism, Feminism and anti-war movements in the West at that time was kind of a challenge to this theory.

Therefore the whole left or liberal versus conservative quarrel had become meaningless. This view in early 60's meant that basically futurists stopped political challenge of Soviet Union on the basis of fundamentals of economy as they saw not much of a difference between the two models in their fundamental industrial basis and the war of words was reduced to a useless ideological war. This is how Daniel Bell himself focused on writing his new work which he considered as the continuation like a fourth volume of Marx's Capital. The masterpiece of Bell predicted the Information Society so accurately that it is still an extraordinary work of economic theory. But more than ten years before that, in 1960, what the futurists including Daniel Bell did not realize was that although the visions of liberal theory were mostly incorporated in the Western democracies but the human values pursued by socialists such as health insurance, unemployment benefits, women and children's rights are still hardly achieved in the United States. They were right that continuing on the path of various New Left groups was not getting anywhere but defining these rights separate from comprehensive system of liberalism or socialism was still needed, a work that John Rawls a neo-liberal did in his work on "A Theory of Justice" and Daniel Bell recalls in later years in his "The Winding Passage."

Neocons in contrast to Rawls just took the tenants of "The End of Ideology" beyond the the the 1960's and had no concern for theory of justice. They just used this outlook in their attacks on the Soviet Union which worked very well because the Soviet's politics had been reduced to an "ideology" hardly relating to the reality. In other words the believers still thought of it as the proletarian ideology when seeking salvation.  It was just like a religion. But the liberal and socialist's demands for human rights in political and economic spheres were not fictions and were real and although had been partly achieved in industrial societies, capitalist or socialist, the battle was not all much ado for nothing to be tossed away as ideology. In fact, after the fall of the Soviet Union during the 1990's this reality still did not show itself because of the simultaneity of a strong economic boom thanks to the computer and Internet technologies. The first dotcom bust in 2000 and the subsequent crisis of 2001 (9) brought forth these age old issues of social justice but this time religious movements especially the Islamist movement focused on refuting the West because of not meeting the human needs. This time one could not respond with "End of Ideology" because the case was not between two civilizations based on the premises of modern industrial world. Here one side was going back to a religious pre-industrial world and one would need to defend the achievements of liberals and socialists, but disregarding the human rights content, political and economic, under the flag of the end of ideology, the contention would move to a civilization war. One civilization thinking of itself as superior to the other which is the way many neocons formulated their plans in dealing with Islamists which aggravated the situation.

One cannot blame the situation on Daniel Bell's "The End of Ideology." His work was great for its time and for three decades provided the framework to deal with the Soviet Union, but applying it beyond its time and place by the neocons ended in disaster in the war with Iraq and it is continuing to draw a roadmap for Western powers to end up in wars of civilizations. Daniel Bell himself wrote many valuable works after "The End of Ideology." In his numerous articles that were collected as "The Winding Passage" he examined the different dimensions of the post-industrial society in various aspects of human life. In his "The Cultural Contradictions of Capitalism" he focused on intercity issues that we have been witnessing in advanced capitalist countries like the United States. Bell's writing even makes more sense today after the first decade of the 21st Century. Actually he still was working on the social justice issue and theory of value in his last years but did not publish (10).

After parting from neocons, Daniel Bell was mostly an academic scholar and taught at Harvard University. I had just come back from Iran in those years and after sharing my paper about AI with him in 1985 (11), in the late 1980's shared some of my experiences of Iran and told him how I had arrived at my new views after the experience of Iranian Revolution and why started Nova bookstore in Sunnyvale of California to find likeminded people to get a better understanding of the global developments and hopefully to publish it in an appropriate journal. In a letter to me, he had so much understanding of what I described to him and wrote "years ago there was a tradition of independent scholarship, and independent journals where such work could be published. Unfortunately, most of our disciplines, including my own, have become "professionalized" and much of the work almost impenetrable [spelling corrected, SG]" (12).

Back to our original discussion, the issues the West is facing in situations like Iran cannot be solved by neocon's drawn gun of a "superior" civilization against an "inferior" one. In fact, some of us Iranians have contributed to futurist visions (13) and are on our way to making a Futurist Party (14). There were Iranians who were among the founders of transhumanism (15). In other words, Iranians who want change in Iran are not just a few monarchists that neocons like to bring back to power in Iran. We have struggled for democracy and secularism long before the formation of Islamic Republic and endured torture and executions during the Shah's regime too and many times have talked about the proper way of solving Iran's nuclear issue (16).  Let's not forget why secularism failed in half of the world (17). The West needs to pronounce its roots of modern values while participating in the efforts for the whole world to work together as we move towards Singularity as sketched the best by Ray Kurzweil. This is how we can fix global economic problems (18). And these are the challenges for understanding and cooperation, it is time to start building Singularity economies (19) rather than making more wars like the one fought in Iraq which cannot get us any closer to security, freedom and justice. Even the Iran and Israel differences should be addressed in this light to give results (20). Let's work together for a futurist Iran (21).