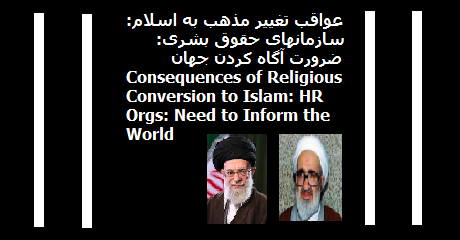 Human Rights organizations such as Amnesty International need to inform the world that those converting to Islam are putting themselves and their progeny at risk of morted killing; because according to Islam, their children will be automatically assumed Muslim, and in Islam, a Muslim leaving Islam may be killed! Even the late Ayatollah Hossein Ali Montazeri who was considered a liberal-minded Iranian Ayatollah, in one of his last interviews, still did not refute sentencing apostates to death and only said that a morted is a former Muslim who consciously advocates against Islam. Views of the current leadership of Islamic Regime of Iran (IRI) about this issue, was discussed 16 years ago in an article entitled 'Khamenei and Salman Rushdie!'