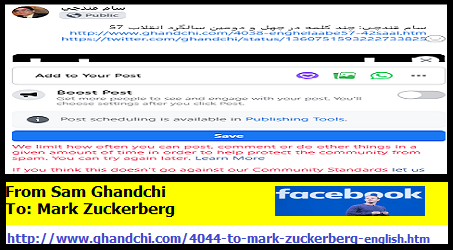 Since two days ago at 11:24 PM EST Feb 18, 2001, I have been blocked from updating posts on my Facebook account! I have been active on Facebook from the first days of your company with my real name and website address. I seldom block anybody. But on Feb 8, 2021, an individual by a fake FacebookID of 'Emad Rasouli' sent me a facebook message listing three Iranian posters of Facebook as Islamic Regime of Iran (IRI)'s agents. I deleted the message and only posted a note in Persian on Facebook without naming him or anybody else saying that I do not wish to receive Facebook messages. This individual sent another private message to me offering his male sexual organ to my family! I reported his message to Facebook support and blocked him. Three days ago, I received a message from your support team saying they did not find anything in the reported message violating Facebook standards! I did not respond. Ever since, Facebook support has been creating disruptions with my Facebook account and since Feb 18th, I have not been able to update previous posts in my account. I posted a message on my account addressed to Facebook upper management requesting an investigation. It seems like the individual by the fake ID of 'Emad Rasouli' noted above works in your support group and is an IRI agent. Please investigate this issue. BTW so much of my time has been wasted in the last three days because of the disruptions to my Facebook account. Thank you for your time.