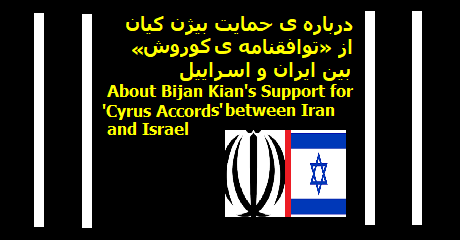 Yesterday, I read Ms. Lisa Daftari's report about 'Cyrus Accords' proposal for Iran-Israel relations, in Foreign Desk News, which included Mr. Bijan Kian's support for this plan. Personally, 14 years ago, I wrote my view of Iran-Israel relations, in an article entitled 'Danger of IRI-Israel War .. and What Iranian Opposition Needs to Do,' and I still hold the same views about the topic. The proposed 'Cyrus Accords' seems to be a step in the right direction. Frankly why JCPOA at the time of President Obama faced total rejection by US Republicans in Congress, was because it did not include Israel's security and any return to JCPOA without including Israel's security will result in the same position by US Republicans. Thus something like this 'Cyrus Accords' is surely needed to make any continuation of JCPOA, a bipartisan agreement, to have the backing of US Congress! Of course, this is 50%, the other 50% is for Islamic Regime of Iran (IRI) to agree with such an addition to JCPOA. It would be a big challenge for Mr. Bijan Kian and those who have initiated this 'Cyrus Accords' proposal to get it off the ground, and I should repeat again that I see it, as a step in the right direction, and wish them the best in this endeavor! And as I wrote a month ago, as far as Iranian people are concerned, 'The Main Question for Biden is not JCPOA.'