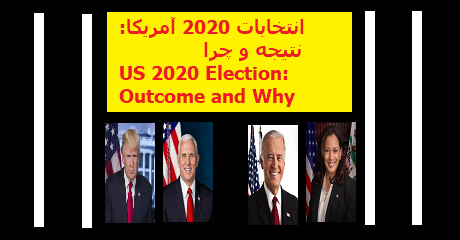 The US 2020 Presidential Election was held yesterday. As an Iranian-American, my concern about US-Iran relations are very important, but that was not on the mind of most Americans who voted in this election. I believe as far as IslamicKKK is concerned, President Donald Trump understood the danger of both Sunni version such as Daesh, and the Shi'a version of Islamic Regime of Iran (IRI), and in fact, stood up the best to IRI more than any other US president in the last 42 years, without getting into a war, which was quite an achievement, while some Democratic Party leaders such as Elizabeth Warren were appeasing IRI helping NIAC even during the 2020 Election! Unfortunately not only for the American people, but for most of the world leaders the danger of IslamicKKK in Iran, Middle East and the rest of the world, and the need to counter IslamicKKK strongly in a peaceful manner, is not understood, as discussed before! Nonetheless, American people did not make their decision about 2020 election based on IslamicKKK situation in the world. Actually the economic situation of the electorate was the basis of the votes. President Trump's toughness with Chinese financial practices and using the money to help the US farmers, created a strong support for him in the rural areas, especially in the South and the Southern parts of the Midwest. But his promises to industrial workers to bring back the lost factories to the US and the hope of lucrative manufacturing jobs did not pan out and this was the reason for lack of enough support for President Trump in Wisconsin, Michigan and Pennsylvania. True that the Democrats have not been able to revive the high-paying manufacturing jobs either but at least they promise social programs that can alleviate some of the hardship of those who worked in industries of the upper Midwest states and the East Coast in the past. Even in the last month before the 2020 election, a stimulus package was proposed by the Democrats in Congress, when President Trump had come down with a Corona virus, but US Senate opposed the package several times, and when the President got well, at first he also opposed the measure but later called for a better stimulus package which the Democrats did not support, and still the Republicans of the Senate would not support it either. In a way, that was the last straw on camel's back which definitely hurt President Trump's vote in those three states where people have lost a lot of manufacturing jobs and are hurting. At least the promises of socialist faction of Democrats help to ease the pain of those under the current economic pressure of Covid-19. Frankly the solution to the economic hardship of former industrial labor cannot be found by current visions of Republicans or the Democrats. The only solution is a totally new vision of Kurzweilian Futurism that unfortunately those in leadership of both parties have neglected for a long time, and the new factions, whether those who call themselves Tea Party within the Republican camp, or the ones who call themselves Progressives in the Democratic Party, are not really trying to come to grips with this new vision!