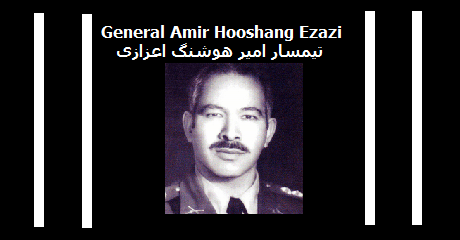 Dear Dr. X, I consider you a very good friend although I neither know your real name, nor have I ever met you and have never talked to you either and we only know each other on the Internet. Also my position about Mr. Reza Pahlavi and with regards to monarchy is clear, thus what I am writing is surely not because of being an ardent supporter of monarchy! I just read your criticism of Mr. Reza Pahlavi and specifically with regards to a 1984 coup plot of General Amir Hooshang Ezazi. I have never known about such a plot and neither have I known about General Ezazi, but I can tell you such a plan would have surely failed at that time. That was when the regime was winning in the war against Iraq and people supported the regime in that time-frame and actually that was the time when a lot of Iranian opposition activists inside Iran, who were not even active anymore, were crushed by the regime and most of those executed during 1988 prisoner massacre of the regime, were actually arrested at that time. So if Mr. Reza Pahlavi had decided against such a coup plot in that time-frame, in my opinion, he had made a right decision.