Why Shapour Bakhtiar Did Not Succeed in January 1979
Sam Ghandchi
http://www.ghandchi.com/3836-shapour-bakhtiar-english.htm 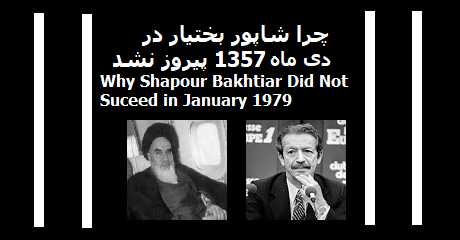 More than 17 years ago I published my analysis of the 1979 Reactionary Revolution in Iran in a book entitled 'Futurist Iran' and there is not much to add to what was written at that time. About two months before the success of the 1979 Revolution, late Shapour Bakhtiar who was a leader of Iran's Jebhe Melli was appointed by the Shah as prime minister of Iran which even caused a split in Jebhe Melli, but within two months his government collapsed and with it the former Iranian regime was ended and Ayatollah Khomeini succeeded within two months and of course following two years of unrest in Iran. A few years later, Shapour Bakhtiar who was still active abroad against the new Islamic Regime of Iran (i.e. IRI) was assassinated by IRI terrorists in Paris and every year there are discussions among Iranian opposition as to why Dr. Bakhtiar did not succeed and last week was the anniversary of his assassination. But what happened in 1979? The reality is very simple. Iranian people in their outlook, in the two years of upheaval in 1978-1979 period, had moved beyond the old regime and were looking for an alternative. The leftists who were leading the opposition in early 1977 were hoping for a situation like 1941-1953 period of a semi-democracy to form their political parties, workers unions, etc which did not materialize following the poetry nights at the Goethe Institute in Tehran in the Fall of 1977 which had started following Jimmy Carter's call for human rights in Soviet Union that also helped Iran's opposition. Nonetheless, the leftists did not move beyond Shah's regime in their thinking and were still waiting for a 1941-1953 situation, even the most radical and largest leftist group, Fadaian-e-Khalgh, accepted Tudeh Party's leadership whose model was always 1941-1953 period of semi-democracy in Iran which Shah did not accept to allow it to form. This was the background situation when Shapour Bakhtiar took the rein of the state two months before the collapse of February 1979. It is true that Dr. Bakhtiar spoke of forming a secular republic (laic) as his final goal and he immediately dissolved Shah's Savak, but Shapour Bakhtiar did not have a clear message to immediately overthrow the monarchy, whereas Ayatollah Khomeini invented the so-called "Islamic Republic" phrase in response to what people were asking for, even though we all know before that, Khomeini had always talked of *Islamic State* and not a so-called "Islamic Republic." Bottom line the people in their outlook had moved on and passed the former regime whereas the Leftists, Nehzate Azadi, Jebhe Melli and Dr. Bakhtiar were still thinking in the framework of 1941-1953 semi-democracy period of Iran. This is why Dr. Shapour Bakhtiar lost and Ayatollah Khomeini succeeded. I am not writing this note to end the discussion about the history of Iranian Revolution. Even more than two and half centuries after the Great French Revolution, still historians discuss that revolution and reasons of its aftermath and the same will be for Iranian Revolution of 1979. I am not even a historian and my aforementioned book above is not a history book per se, and its initial title was 'Futurist Iran: Abating the 1979 Reactionary Revolution.' The reason I am writing this note is because of what is happening in Iran today. Again the Leftists, Jebhe Melli, and also this time the Islamist Reformists, who are a strong opposition within IRI regime whereas the reformers within Shah's regime hardly were heard, and moreover, the Iranian Monarchists including the supporters of Constitutional Monarchy are all thinking in terms of 1941-1953 semi-democracy model for Iran, as what they hope the result of Iran's current uprisings of the last 4 years to be, whereas people's message which was pronounced in December 2017 calls for dissolution of IRI and nobody even those who pronounced slogans supporting the efforts of Reza Shah for secularism, ever called for restoration of past regime, the Iranian monarchy. Iranian people have passed both regimes in their outlook, i.e. the Islamic Regime and the former Pahlavi monarchy, and people are ready to start fresh again, just like in 1979. Can people make a mistake again? Sure, they can, but those who are not listening to what people are calling for, will be doomed the same way the Left and Jebhe Melli including Dr. Shapour Bakhtiar, lost in 1979, although Dr. Shapour Bakhtiar was one of the most enlightened political leaders of Iran's history, someone whose like are rare found in the history of any nation as best described recently by Dr. Ali Rasekh.