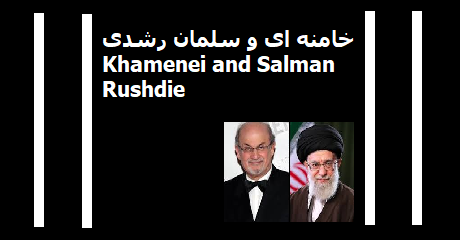 It is in the news that yesterday, Ayatollah Ali Khamenei, the Supreme Leader of IRI (Islamic Republic of Iran) has said:

"They talk about respect towards all religions, but they support such a mahdour al-damm morted as Salman Rushdie."  In the Sharia, or Islamic law, "morted" is a reference to someone who has committed apostasy by leaving Islam while "mahdour al-damm" is a term applying to someone whose blood may be shed with impunity.

The same wording is used by all Islamists, including Ayatollah Khomeini, who first issued the death edict (fatwa) against Salman Rushdie in 1989.  They all think that according to their religion, Rushdie has committed a crime, punishable by death, because of expressing insulting opinions of Islam. And they think the punishment of murder they prescribe, is exercising the rules of *justice*, since it is according to the laws of Islam.

Ayatollah Khamenei, in the above quoted statement, is trying to convey that the democratic position to support Rushdie, as *justice*, is in contradiction to respecting Khamenei's religion, Islam, which according to him, rather requires the murder of Rushdie for his views, as *justice*.

In Ancient Greece, the monotheists were considered the atheists, because they did not worship the gods of the Greeks. Actually one of the charges against Socrates in the Athenian court was "holding thoughts of other Gods different from the Gods sanctioned by the state".

Thus when a religion is setting the standard of justice, it can consider holding thoughts against the God of that religion as a crime punishable by death.  Not only murder as punishment for such religious charges, a religion can even demand murder as gift of human sacrifice to fertilize the land, with the blood of the first born, when a religion considers life of the first child as the gift of the land returned to itself.  Should such religious practices also be respected?  Wouldn't respecting religions mean allowing such practices?

I think what is wrong here is respecting religions.  Khamenei is right that there is a contradiction.  The freedom of religion means that people should have the right to choose any religion, and hold any thought they wish, as long as their religion's understanding of rights and justice is not contrary to human rights. So freedom of religion does *not* mean respecting religions.

In fact, human rights takes precedence over the view of justice of any particular religion, and human rights is what needs to be respected, including the human right to hold any religious views, as long as the view does not prescribe committing crimes as religious duty, in which case, religious or not, the crime should be dealt with in a court of law, based on human rights.

For example, if a Satanic religion decides to kill a virgin as a religious duty, adherents of that religion committing such crime, should be arrested on murder charges, and their religious views, and their sense of *justice*, will *not* be respected, rather the human right of the victim of human sacrifice will be respected, because the *justice*, as viewed by human rights, takes precedence over any religious view, in the modern society.

This is why in the case of Salman Rushdie, the Western world should have acted clearly from the start, and should have said it has *no* respect for Islamist justice, when it calls for murder of someone for their ideas, because that is contrary to the human rights.  Organizations like the UN must have upheld human rights of Salman Rushie, and the World Court should have summoned Ayatollah Khomeini, because of issuing such murder edict against Salman Rushdie, who had the human right to express his views freely, without the threats of Islamists to his life.

If the UN and World Court and Western democracies had acted in the above manner, the chained murderers by Islamists of IRI, and also the  Sept 11th WTC crime of Islamists, which were both based on Islamist *justice*, and religious edicts, might have been prevented.

The Western democracies should have pursued such a clear policy to stop these criminal edicts in the bud, rather than freeing the arrested Islamist murderers in Germany and France, who were related to the murder of Bakhtiar, Boroumand, and Kurdish leaders, to appease the Islamic Republic of Iran, or by inventing political reinterpretations of the British politicians,  to make room  for such criminal activities of the Islamist fundamentalists, all under the erroneous banner of respecting religions.

The civilized world should *never* have compromised with such murderous religious ideas, under the pretext of freedom of religion, and the so-called respecting religions, because religious freedom of religion does not mean respecting any specific religion's views and practices, and simply means the right to hold religious or nonreligious views as long as those views do not prescribe committing crimes, and the West should have been clear in stating that it will *not* respect and tolerate any religious view or action that prescribes crimes against humanity, or curtails the human rights of any individual.  In fact, the theories of cultural relativism were also responsible for many of these errors in the West.

The  United Nations and World Court should openly add this topic to their agenda to deal with such criminal religious activities of religious states, organizations, and individuals.  This is what defending human rights of every citizen of the world in the 21st Century means, or the Ayatollahs will take turns issuing more grotesque edicts.  In fact, some of them have to outdo others in fanaticism, for the fear of the competing ayatollahs pulling the rug from underneath them by being more zealous.

There should never be any respect for a crime activity with a religious tag, just as a human sacrifice is considered a crime, and anyone doing it, using any religious arguments, will not be tolerated, under the pretext of respecting a religious right, and such criminals are arrested and tried for crimes against humanity, in a court of law, rather than to be condoned and tolerated under the banner of "respecting" this or that religion.