Mr. Zarif, IRI is to Blame and not Pompeo in Warsaw or Bakhshi in Ahwaz 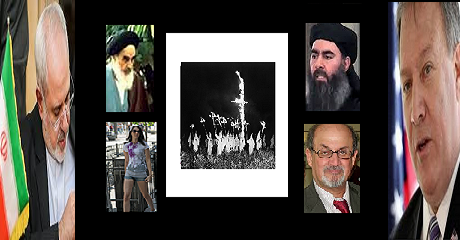 Mr. Zarif, Last week Mike Pompeo US Secretary of State announced a meeting for US allies in Warsaw scheduled for three days after the anniversary date of 1979 Revolution to strategize against Islamic Republic of Iran (IRI) and you contacted Polish government with admonishment for hosting this meeting. Didn't Mr. Pompeo call on IRI six months ago and asked to simply be a *normal* state (1) and not a state sponsor of terrorism in the Middle East and elsewhere in the world. Last week, also inside Iran, Mr. Esmail Bakhshi, an ordinary worker in Ahwaz who had just asked for labor demands for some workers in Ahwaz was tortured to death and when he spoke up and asked for open debate with IRI Minister of Intelligence, IRI has since tried to silence him just like many others who are in IRI prisons for demanding human rights in Iran. Both Mr. Pompeo and Mr. Bakhshi have raised legitimate issues with IRI, one externally and the other internally and any impartial referee will sum up the actions of IRI in the last 40 years to be terrorism outside Iran and repression inside the country at the expense of failing Iranian people's pursuit of happiness. Please blame IRI and not Warsaw or Ahwaz for the actions of IslamicKKK which has ruled Iran for 40 years (2). Instead of calling the Polish government, please visit Evin and Fashafuyeh prisons in your own backyard in Tehran and ask to meet Mr. Soheil Arabi in Fashafuyeh prison; also visit IRI bases in Syria, Lebanon, Iraq, Yemen and elsewhere in the Middle East where you support terrorists and are not just fighting Daesh. Then you can find the answer to the current situation of Iran. Look at the United States, 243 years after the 1775 Revolution, the American people have criticized and even insulted the US president in open press and everywhere in this country the USA for two years (4) and nobody's nose has bled, can you say the same thing about the people in Iran? The first step to remedy the situation is to admit the failure rather than celebrating the 40-year experience of IRI disaster, following the 1979 Revolution that has only brought misery, war and repression for Iranian people (5). You know about the Persian expression that says: If you do not like what you see in the mirror, break yourself — not the mirror.