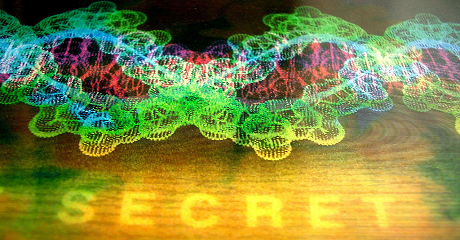 RNA is believed to be older than DNA. RNA and DNA are chains of nucleotides. DNA is composed of one of four nitrogen-containing nucleobases—either Cytosine, Guanine, Adenine, or Thymine. In other words, all DNA on Earth is made of CGAT sequences (5). RNA's composition is the same except that instead of Thymine, it has Uracil, thus it is made of CGAU sequences (6).

We can see various paths in the inanimate geological development of Earth and also various branches in the taxonomy of biological evolution on Earth but when it comes to RNA/DNA, everything is just CGAU/CGAT based! In other words, if life had originally evolved on Earth, we should have traced remnants of life-forms based on other kinds of nucleobases, even if they did not all survive, the same way multitudes of geological forms have developed on Earth and various species have evolved on Earth since the inception of RNA/DNA on Earth.

It seems that life has evolved elsewhere in the universe, and in that location, life forms with other nucleobases may have evolved but only CGAU/CGAT left its birthplace arriving on Earth about 4 billion years ago. If this hypothesis is true, perhaps the RNA/DNA based on CGAU/CGAT have spread to other stars, planets and moons as well, and might have survived and evolved in some other locations in the universe where the cousins of our biological entities could exist to this day.

2. Age of the Earth
https://en.wikipedia.org/wiki/Age_of_the_Earth

3. We’ve been wrong about the origins of life for 90 years
https://theconversation.com/weve-been-wrong-about-the-origins-of-life-for-90-years-63744