Azerbaijan Events and Structure of Power in Iran, Third Edition

P.S. Oct 1, 2017: Announcing change of position to opposing any form of federalism for Iran
http://www.ghandchi.com/1641-etelaieh-federalism-english.htm 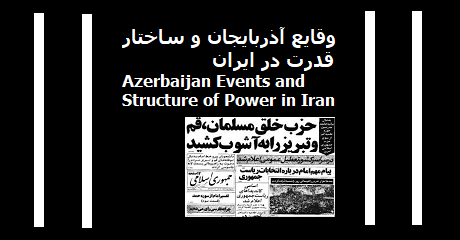 Although most of the Iranian opposition thinkers agree that Iran's 1979 Revolution was a reactionary revolution, but when they try to analyze particular events in Iran, it is as if they forget the reality that the goal of this regime from its inception to this day has been, and is, to 'return to the past of 1400 years ago.'  Therefore they think of despotism of this regime as some kind of fascism or communism which were essentially the currents of the modern society that wanted to move faster forward by using their own kind of dictatorship.

From Naseroldin Shah to Mozafaroldin Shah, whether the supporters of despotism or constitutionalists, they went to European trips and considered the modern world as their symbol and ideal although one group wanted to continue by dictatorship and the other by democracy. The Islamic Fundamentalist groups at the time of  Constitutional Movement (i.e. 'mashrooeh'), were very weak and saw their chance in maintaining the monarchy despotism of Mohammad Ali Shah and wanted to return the wheel of history, but contrary to their imagination, if Mohammad Ali Shah had succeeded, they would *not* achieve what they wished for and no wonder Khomeini saw Sheikh Fazlollah Nouri as his predecessor because someone like him could have ushered in what they dreamed of. Thus the difference between Iranian society at the time of constitutionalists, contrary to 1979, was that the former wanted to move ahead faster, and of course the constitutionalists did not want to progress only in the economic area but they also wanted to move faster to the modern world, one group by despotism and the other by democracy, whereas in 1979 Revolution those desiring modern democracy were a minority.

For more than 25 years, IRI has been trying to move Iran to the past, and in this attempt it has had to face internal and external obstacles, but this has been the direction of the regime all these years.  In fact the importance of putting veils on women's head is not that some Iranian women preferring to have veil and this being their demand, or that the traditional society being reinstated.  The importance of this, is in the fact that it is a move in a society where a great number of its women had been without veil, and is being pushed backwards to a society with Medieval standards and this goal is being pursued very consciously; and only when the regime sees its survival at stake, this retrogressive movement is adjusted to be continued anew later.  The difference between Iran's so-called Islamic "Republic" with Taliban of Afghanistan is only in the fact that IRI is more pragmatic or else they both have the same direction, and of course one has Shi'a ideals and the other has Sunni ideals.  Let me repeat again that I do not mean that someone is a Muslim and likes to wear veil, my point is about pulling back a society where the majority had removed veil for a long time.

The events of Azerbaijan have caused a surprise for many who say Azeris are also Shi'a and even Khamene'i and many of the regime's top brass are Azeri and then they are surprised to see such an opposition to the regime and that being in Azerbaijan!  Let's return to the first years after the 1979 Revolution and remember the demonstrations of the supporters of Ayatollah Shariatmadari and Hezbe Khalghe Mosalman that was suppressed in Tabriz.  If we look at it closely from as early as those days, the Medievalism of this regime was the cause of the clashes.  Meaning that the leaders of this regime discriminated between the followers of Ayatollah Khomeii as Marja and those following Ayatollah Shariatmadari and based on this Medieval distinction a part of the population was suppressed!  In other words not just Sunnis and followers of other religions like Baha'is but even having what Ayatollah as one's Marja caused a difference in treatment of Shiites themselves. And later Ayatollah Montazeri fell from favor and Ayatollah Araki was favored and today Naser Makarem Shirazi , Fazel Lankarani and Meshkini are at the zenith of power.

What is important is not what Ayatollah is more popular among the Shi'a faithful, the issue is that IRI is pulling the society backwards and divides the population on the basis of these medieval differences and it is within the constitution of the Islamic Republic and for example a group of petrified ayatollahs in shoraye negahbaan (i.e. the Guardian Council) are controlling the whole political life of the society and valie faghih (VF) and shorayeh maslehat (Expediency Council) and all the Medieval institutions control the whole power in Iran.  This system of power for 25 years has tried to pull the society backwards in every realm of life.  Many of the Iranian youth despite opposing the regime and despite their desire for Western culture of the media, nonetheless all these years have been under the influence of the superstition promoted by this regime in the schools and in every venue of the society, and the effects of that is evident now.  In contrast to Iran's Constitutional Movement of 1905 that the competition of various forces of state was in moving forward, in the Islamic Regime (IRI), the competition of the ruling forces is in how to return the society to that of 1400 years ago.

Let's return to the events of Azerbaijan.  These events are a reaction to a Medieval regime yet not a Medieval regime like Qajar or Saudi Arabia, but a medieval regime that is trying hard to move a society that has been modernized, backwards, and not just to the society of 100 years ago but to that of 1400 years ago and not just in Qom, Mashhad or Chahe Chamkaran, but all over Iran.  In another article, I noted that we are now living in a global world where people have countless options and this is why we see millions of Iranians who have emigrated all over the world.

Are the demands of Azeri people ethnic?  I have explained about this a lot that in the present era basically national governments are losing their significance and what remains is just that *ethnicity* which just like family is losing its political significance more and more.  Therefore to oppose a regime that is only comparable to Taliban, although more pragmatic, the local and regional characteristics, because of the Medieval behavior of the regime, in different periods, are pronounced more, and the Iranian society will finally find its solution in a system of governance that would respect the local and regional characteristics and to establish democracy in all parts of Iran thru checks and balances of the three branches of government all over the land.

It is true that if this regime remains in power for hundred years this can cause the disintegration of parts of Iran the same way that the end of Middle Ages meant the formation of new states in Europe that left the tyranny of the Medieval Church.  In fact millions of Iranians who do not want to live in Iran this way have now left Iran, not because of not having job, but have left because they do not want to accept the forcing of the return to Medieval life and in fact the Iranians living abroad are the first "separatists of Iran" who have separated from Iran because of opposing the regime by taking advantage of possibilities of a global world.  I hope that various parts of Iran instead of separating from each other to join hands with each other and to create a modern state that would pay attention to the demands of every Iranian with democracy and going forward.  A secular and democratic state to end this regime's pushing Iran 1400 years to the past!