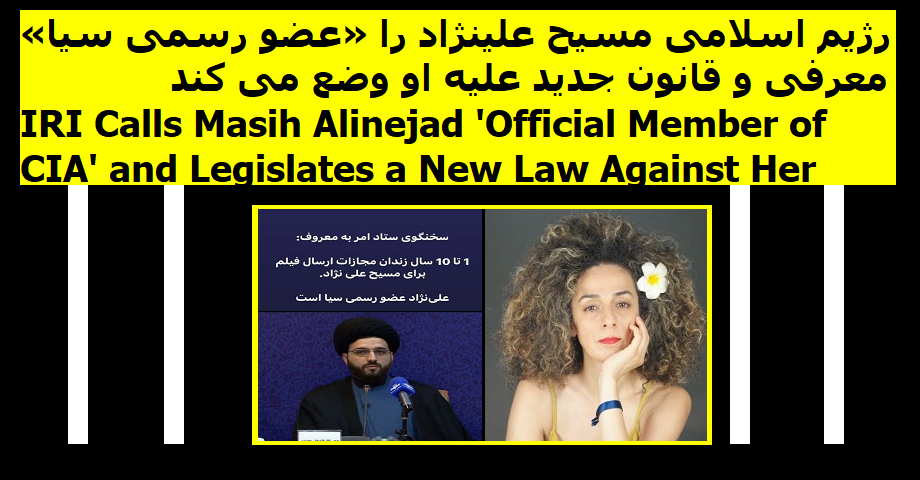 About a week ago IRI's Morality Police spokesperson issued a statement as follows:

"Iranian people will face up to 10 years in prison for sending video to Masih Alinejad because she is an official member of CIA."*

1. IRI Morality Police Official *legislates* a law, then based on his self-made law issues a *judicial* edict against an individual, and finally *executes* the self-made law! This whole event says a lot about the absence of separation of power in the Islamic Regime of Iran (IRI) and I hope international press like BBC to invite HR legal experts to discuss this ridiculous IRI statement!

2. Ms. Masih Alinejad is referred to as a so-called "official member of the CIA" by this IRI official! CIA is not a student association to have members! CIA like any other government agency has staff, e.g. secretaries, and also has undercover spies like any other spy agencies in the world! Ms. Alinejad works as a journalist for VOA which is another US government agency. I am not denying that CIA may have spies in VOA, but that would be the last place CIA would need a spy! CIA spies work for the government institutions of Islamic Republic of Iran (IRI), the same way Mossad agents work for Iran's Islamic government, and they have already killed a few people in IRI's nuclear sites as reported by both Israel and IRI news agencies themselves! So the announcement by this IRI official to justify the failure of IRI in face of Mossad and blaming Iran's opposition for their own failures, is purely ridiculous.

3. As far as CIA supporting the voice of somebody in the opposition of any country, there has been cases like that in history when during Soviet Era, the book Dr. Zhivago of Boris Pasternak was published and distributed by CIA! But the author cannot be blamed for the support, if CIA makes such a decision! The same way IRI itself publishes and distributes the works of many opponents of US government such as Louis Farrakhan!

4. I have personally written about the issue of CIA and Iran's opposition, two years ago in an article entitled 'CIA: Open Letter about Iranian Opposition,' and there is nothing to add!

5. Iranian people and opposition reject compulsory hijab and IRI repression, and we want an end to the religious state in Iran and these are all aspirations of Iranian people and have nothing to do with any foreign government! I am one of the millions of Iranians who participated in the 1979 Revolution hoping for a paradise but have suffered witnessing the hell of Islamic Regime of Iran (IRI) for 43 years and do not want to live in Iran! I condemn any IRI official who tries to show the legitimate struggle of Iranian people as a CIA plot and I fully support the tireless work of Ms. Masih Alinjad, who is an astonishing journalist and a great human rights activist!