For me the First Intro to Anarchists was not from Books
Sam Ghandchi
http://www.ghandchi.com/4278-anarchists-english.htm 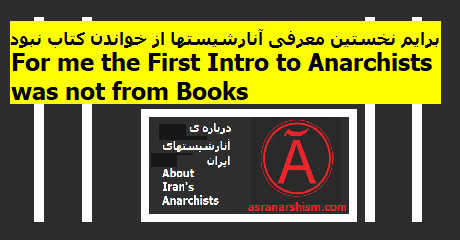 Maybe no other Iranian author has written critiques of Anarchism on the Internet as much as I have done! My first introduction to anarchism was when more than 52 years ago I entered the United States and went to University of Kansas in Lawrence at the end of Summer of 1969. The first night in the dormitory, I saw a sign on the green board which said there was a *curfew* on campus that night! I looked up the word in dictionary and was surprised and asked around why! I was told the anarchists had blown up the computer center on campus! This is why whenever I hear the words *spirit* and *1969* in the song *Hotel California*, it reminds me of the 'spirit' of anti-war movement during the days of Vietnam War although the word *spirit* the way used with a double meaning in the song, also in American slang, means alcoholic beverages! Of course, there were cases in history when some American anarchists such as Joe Hill were framed and falsely blamed for a murder and executed although they did not commit any act of violence; however, in general in the U.S., anarchists were those who were tired of working within the system to make change and revolted against the system sometimes even to the extreme of violence! In Iran of today, there is an anarchist movement but it is a totally different kind of movement because their reason for choosing anarchism in the first place in Iran ruled by the Islamic Regime, in contrast to US anarchists, was because of not getting a chance to work within the system, otherwise, they are very liberal-minded and support philosophers like Karl Popper and Paul Feyerabend! Finally I would like to note that in 1982, when I returned to the US, after the 1979 Iranian Revolution, I exchanged a few letters with the late Paul Feyerabend and learned from his ideas. Unfortunately I have lost those letters. Nonetheless, I have always been a critic of anarchism which is also evident when reading my criticisms of the views of Robert Nozick (+ ++). Moreover, if the readers like, they can read the writings of Iran's anarchists on sites such as 'The Federation of Anarchism Era' and judge for themselves.